Exactly six years ago today, I opened the NY Times Travel section to find an article entitled, “Fine Dining with a Hippie Past.”

Feb. 25, 2007 – “BOULDER, Colo., used to be a tough place to eat good food. For all its outdoorsy charm, health-conscious Boulderites had to settle for restaurants that served mush like overcooked lentils and brown rice. The food may have been healthy, but it was also monochromatic and unappetizing.”

The article described how Boulder, CO’s dining scene was abysmal for many years until chefs from around the country showed up to spiff up the scene. Hallelujah, our dining prayers have been answered!  The author goes on to give praise to places like The Kitchen, Mateo and Frasca, all high-end farm-to-table establishments that indeed have taken Boulder’s dining scene to a place the town had never scene before; not just for the food more so the buzz. A lasting buzz at that. Six years later, The Kitchen and Frasca are stronger than ever and expanding in and out of town. I eat at these places (and others just like it) and fully support their presence in town.

When I stumbled upon the article I was living in Brooklyn but had always remained incredibly proud of my Boulder roots. Granola and all. My blood was boiling by the time I finished reading the article. I took a great deal of offense to the author’s dismissive and frankly ignorant tone. Without giving the article a second read, I went straight to my computer and sent a letter to the editor. I don’t think I have ever written anything with as much passion and ease as I did that letter.

Two days later I got a call from the fact checking department of the NY Times. This must be a joke I was thinking to myself. But alas, the caller was confirming that they received my letter, that I was who I claimed to be, and it was to be published in the following Sunday’s paper. Sadly, they published a VERY abbreviated and somewhat misrepresented version of my lengthy letter, but here it is in all its (edited) glory:

To the Editor: I thought that ”Boulder, Colo.: Fine Dining With a Hippie Past” (Surfacing, Feb. 25) was misinformed and misleading. I grew up in Boulder, and my family was and still is actively involved in the local food community. I pride myself on having grown up with a sense of gourmet food. and we certainly frequented diverse restaurants on a weekly basis — none of which I can recall serving ”mush like overcooked lentils and brown rice.”

That statement, in my opinion, is insulting to longstanding Boulder establishments. If the reporter had done proper research instead of making bold generalized statements, she would have come across restaurants like Laudisio, Pasta Jay’s, John’s, Mediterranean, Orchid Pavilion, 14th St. Bar and Grill, the Greenbriar Inn, Flagstaff House and Lucile’s.

All of these establishments have been in business for years and pride themselves on serving great food.

So why am I telling you all of this, other than the fact that the original article was coincidentally published six years ago to the day? And no, I didn’t realize that February 25 was the original date of publication until I sat down tonight to write this post and happened to notice it was exactly six years later. Eerie, but that’s beside the point. I will tell you what is beautiful about all of this. Last week, the Times published an article discussing granola’s new-found place in the ranks of haute-gourmet. This has been going on for quite some time now so I don’t know what took The Times of all publications so long to write about it! (I did a piece on it here). The article mentions many a granola company, but the one that jumped off the page for me was OAK, a top-notch new american spot in downtown hippie town, U.S.A, recognized for their savory granola. Their cocktail list is like none other in town and it represents the ingenuity and class that the owners, Steven Redzikowski and Bryan Dayton bring to the table. The granola article was accompanied by three highlighted recipes, one being a Rosemary and Pistachio Granola recipe by none other than Steven Redzikowski.

There you have it. Six years after I read an article about granola-town Boulder, CO serving nothing but mushy lentils, I find myself reading a gourmet granola recipe written by a well-established (though admittedly not native) top-game chef right here in town. Granola first put Boulder on the food map and will keep it there moving forward.

In honor of how far Boulder has culinarily come, I decided to make the Rosemary and Pistachio Granola. Herbaceous granola, like cocktails, is the new black.

1.
Heat oven to 325 degrees. Line a large baking sheet with parchment paper and set aside. In a large bowl, combine oats and pistachios.
2.
In a small saucepan, combine honey, butter, rosemary, chile flakes and juniper. Stir over medium heat until butter is melted. Pour over oats and pistachios and stir until well combined.
3.
Spread evenly across baking sheet. Bake, stirring halfway through, until fragrant and toasted, 15 to 20 minutes. Remove from heat and allow to cool completely. Store in an airtight container for up to 1 week. 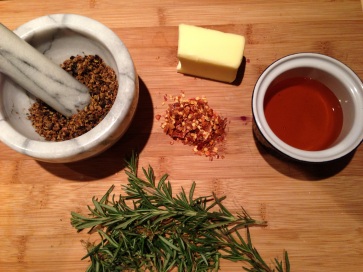 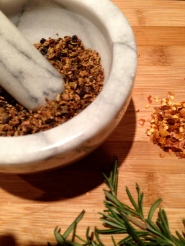 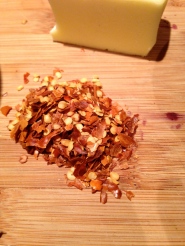 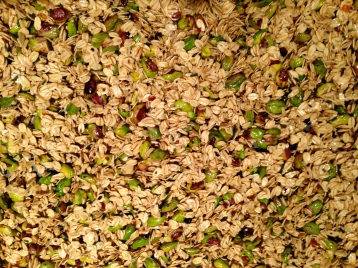 One thought on “Full Circle Granola”